The technical side of broadcasting. Think IBOC is a sham? Talk about it here! How about HDTV? Post DX reports here as well.
Post Reply Previous topicNext topic
9 posts • Page 1 of 1

I did some calcs a long time back considering something like this. I don't recall exactly the scenario, but for some reason "28dB sitcks in my mind. Meaning, you'd lose about 28dB over a simple dipole reception if that dipole was at the same location as your receiving yagi. Now, if your receiving location is blocked by the hill and you're losing 40 dB due to the hill, then your signal would be improved by about 12dB.

I'm trying to remember the movies that showed TV antennas up on hills next to canyons. One was "Play Misty For Me" starring Clint Eastwood as a radio DJ at KRML, a fictional and real radio station in Carmel, CA. In one scene in from of the house where he lived in the movie, you could see TV antennas on the top of the canyon. The other was "Shampoo" with Warren Beatty, Goldie Hawn, and Carrie Fisher. There was also a canyon scene that may have shown that type of TV antenna. That kind of setup uses transmission line, which has considerable loss compared to the gain from being on top of the canyon. But the transmit antenna wouldn't have that loss. It would work best with the transmit and receive antennas on opposite sides of the hill.

Below is a URL to a GTE-Lenkurt book with detailed analyses of point-point r-f link systems, including the use of passive reflectors.

Probably it has more information than most people care to know about this topic, but its page numbers in/near the low 100s may give some perspective to CK-722 and others.

I'm not familiar withe those movies. You sure you're not talking about a community antenna system (precursors to 'cable tv')? They would put a large antenna on the top of a hill, to pull distant stations, then run twin-lead down to all the houses on the other side of the hill. There were amplifiers in the twin lead. Eventually the twin lead got upgraded to coaxial cable and still included amplifiers.

If there is really no signal behind the hill, there's no reason you couldn't put an active repeater in and do it wirelessly and stay on channel.

CK-722 wrote: ↑
Wed Jan 08, 2020 10:45 am
Say you put a high gain YagiLog to receive a signal, then feed it into another high gain YagiLog pointed in the opposite direction on a hilltop. How far would the signal be improved beyond the hilltop?

Below is an estimate with some idea of the performance of a passive re-transmit arrangement, for the conditions shown there.

Losses for this particular scenario are very great. 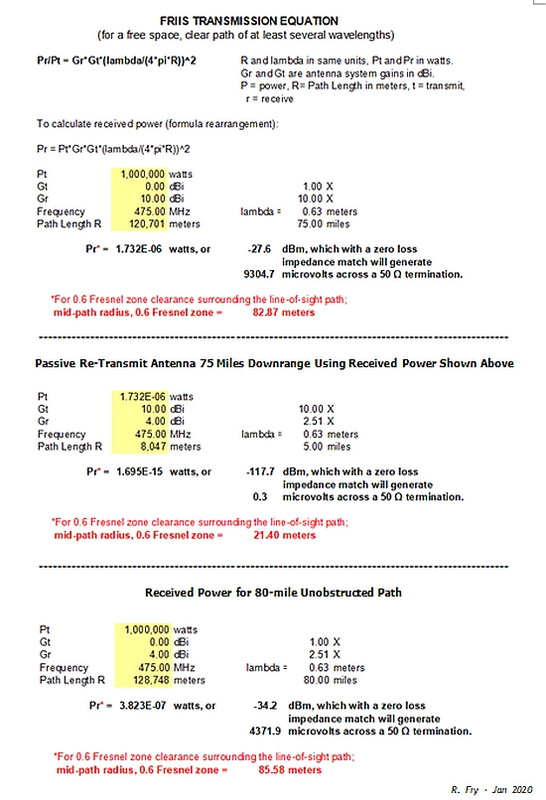 One place I worked at did a test of a "passive repeter" scheme in down town Detroit for UHF two way radio.
The customer had trouble reaching the company repeater with 4 watt hand held radios in a basenment. Our Pickup antenna was in this basement area of a 4 floor building and the High gain Yagi was on the roof connected by 60 ft run of 1/2 inch hardline coax. The target was a repeater on a tall building several blocks away. Results were spotty and several attempts were made to reorient the Yagi to reach the repeater more reliably but after a few months the project was abandoned.

Actually a LPDA (Log Periodic Directional Antenna) is limited to about 6 dB directional gain over it's frequency spread. That's due to it's deign to be usable over an octive or more of frequency with a pretty flat gain.
The Yagi is able to be designed for much more gain over a quite limited freq spread, just add more boom length and more director elements and get more gain !

The Antennacraft/Archer FM-6 and FM-10 use a 3 element driven Log Periodic design in conjunction with Yagi type directors and reflectors. Note that the FM-6 discussion has a modification which considerably improves performance.

Earlier TV antenna Log Periodics used single booms with phasing crossovers like the FM-6, 10, and 13. Later models used a double boom with the 1/4 wave half dipole elements alternated between booms.

I wonder if you could use waveguides using HVAC type ducting and a 45 degree reflector at the top and bottom for an outside to inside the building repeater.