Acceptable registrations in the queue through June 2 at 7:30a ET have now been activated. Enjoy! -M.W.

I'm going to call Trump out for lying

Debate and discussion of current events and political issues across the U.S. and throughout the World. Be forewarned -- this forum is NOT for the intellectually weak or those of you with thin skins. Don't come crying to me if you become the subject of ridicule. **Board Administrator reserves the right to revoke posting privileges based on my sole discretion**
Post Reply Previous topicNext topic
8 posts • Page 1 of 1

I'm going to call Trump out for lying 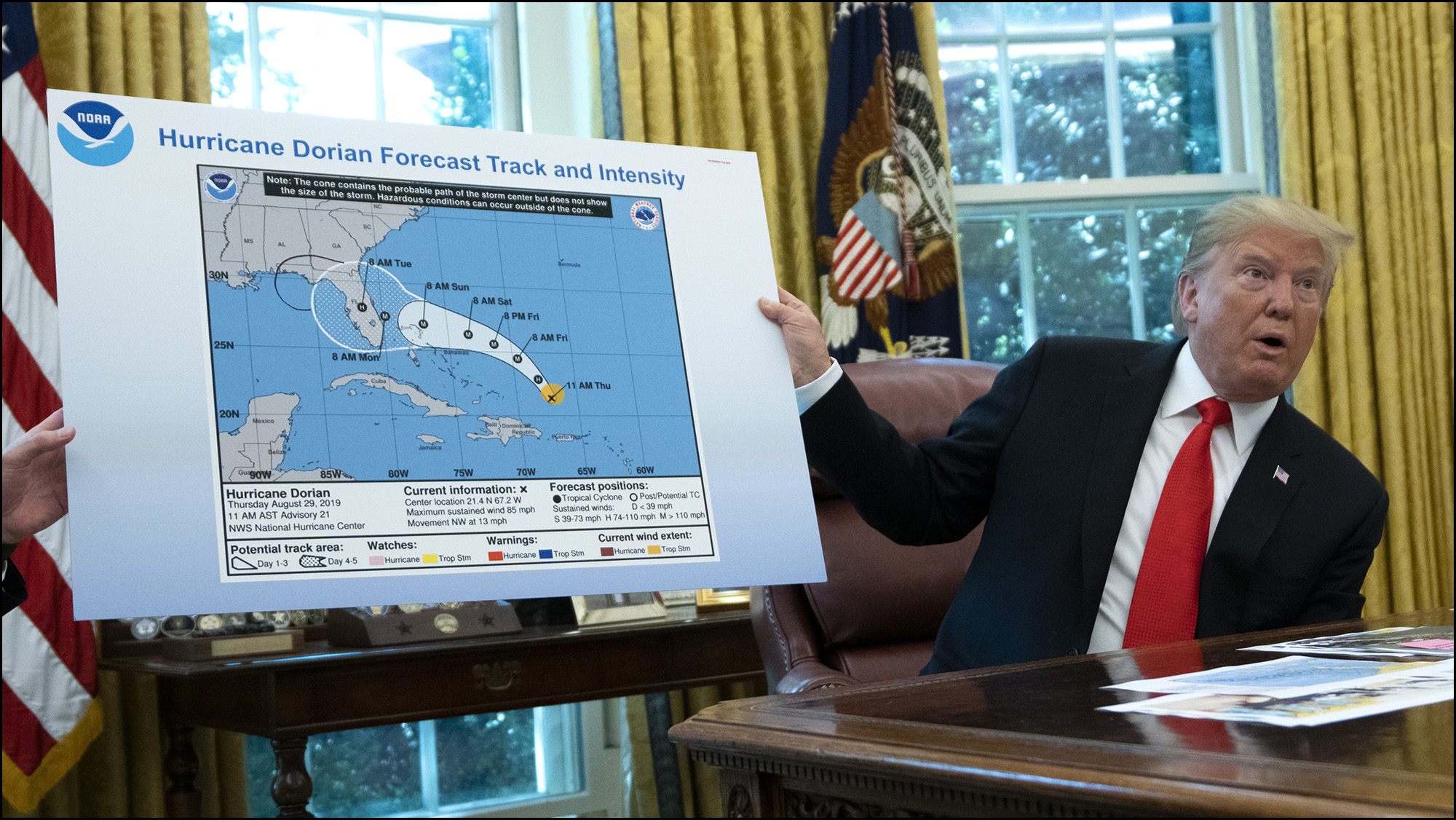 At issue is the black sharpie added to this map to make it look like Alabama was in the projected path.


President Donald Trump held up an altered map of Hurricane Dorian’s forecasted path on Wednesday to argue the massive storm had been headed toward Gulf states – a response to recent criticism that he misstated the storm’s direction.

Speaking to reporters at the White House Wednesday about the impact of Hurricane Dorian, Trump held up what he described as an initial forecast from the National Hurricane Center that showed Dorian moving into the Gulf states,

The thing is, if Trump could have simply let this one go (ie, being wrong about Alabama), it would have long been forgotten about. But not being able to admit he was wrong, he just had to take it up a notch and use this altered map.

Now, the lie....(from the same article linked above)


Trump was asked about the altered map later at the White House Wednesday.

“I know that Alabama was in the original forecast,” Trump said. “They thought they would get it… Alabama…was going to be hit very hard.”

Trump was asked whether someone had used a Sharpie – a favorite pen for the president – on the map to extend the forecast of high wind into Alabama.

Bullshit. He knows damn well someone modified that map with a sharpie - either he himself did it or he directed someone else to do it. Given the nature of where the sharpie was drawn and given the previous criticism over him saying Alabama was in the path, and now given his continued tweetstorm just not letting this one go, there is no doubt in my mind he knew that someone used a sharpie to alter the map.

So far the largest gaffe of his presidency, IMO. And a completely self-induced one at that.

The president is mentally ill.


This was a hurricane fantasy.


Wake up ass draggers. Get with reality before it’s too late.


This was a hurricane fantasy.


Wake up ass draggers. Get with reality before it’s too late.

The last president was dangerously incompetent, but I didn't hear a peep from you about zhim.

Recovering from the financial crater GWB created by melting down the banking industry with lack of regulation for credit default swamps was incompetence?

PM me you adress, I'll send you some good shit. Whatever you are smoke is causing delusions.

Matt - you go right ahead with your Alice in Wonderland approach to each day.

Down is up. Up is down.
Bad is good. Good is bad.
Lies are truths. Truths are lies.

We get your think, man.

The danger is Trump. Because he’s mentally ill. And at the same time commands the US military.

He also has great power to make nearly all who know he’s ill afraid to publicly expose or oppose him.

The last president was dangerously incompetent, but I didn't hear a peep from you about him.

I certainly agree that President Obama was incompetent in a number of different ways.

"Dangerously" incompetent? I cannot completely buy into usage of the "dangerously" qualifier.' Don't get me wrong - I'm glad that President Obama is out of office. I didn't vote for him in 2008 or 2012.

What's ironic, Matt, is you are one of Governor Snyder's biggest defenders. Under his watch, tens of thousands of umemployment insurance filers had money extorted from them by state government, our public schools deteriorated to worst in terms of academic performance in the entire nation, the condition of our roads deteriorated to worst in the nation, what should've been a 50 year flood in Metro Detroit in August 2014 had the impact of a 250 year flood due to infrastructural failings (involving assets whose maintenance is the state of Michigan's responsibility), and an impoverished large city's water supply became tainted with lead for a much longer period of time than what should've occurred due to an outrageously tardy response by his administration.

I would argue Snyder was more dangerous than Obama. Snyder did have a couple noteworthy accomplishments during his time in office, but the bad things far outweigh the good, IMO.

Getting back to the topic of Trump lying: