Lots of new registrations this past week; thank you! Registrations in the queue from March 27 through April 5 at 12:00p ET have now been activated. Enjoy! -M.W.

As the Ann Arbor legend goes, Bob Seger's first "hit" record was played on WPAG in 1961, called "The Lonely One" by The Decibels. In fact, it was just an acetate, and it was only played once. The first station to CHART a Bob Seger record was WTAC Big 600 in Flint. It was "East Side Story", a harder rock tear jerker worthy of Dickey Lee, credited to Bob Seger and The Last Heard. It appeared on the WTAC Chart on 6-23-66. It was over two months later when it appeared on the WKNR chart at #30. 11 days later, it debuted at #7 on the CKLW Chart. WPAG was the first to play Bob Seger's Bob Dylan inspired "Persecution Smith", appearing at 1-16-67 at #43, three days before it charted at WTAC at #29. Four days after that, it appeared at #29 on CKLW. "Heavy Music" first charted on WTRX on 7-19-67 as an HB. Five days later, it appeared at #44 on the WPAG Chart. This pattern was followed by MANY of the Michigan and Regional and Local "Garage Bands", often appearing on WPAG, WTAC, WTRX, WILS, CKLW, and WKNR Charts within days of each other. The Tri-Cities and Grand Rapids were usually a little later. Grand Rapids and Kalamazoo were more influenced by WLS, WOKY, and WCFL Charts. The song "Rosalie" is autobiographical in that they wanted to get on the neighboring market stations to play and chart records first in order to promote the records to Ms. Trombley at CKLW. From CKLW, the records frequently spread to Cleveland, Toledo, Columbus, and NY, NJ and CT neighboring market NYC stations from the Large Eastern Lobe from the Night Pattern of The Big 8, equivalent to a Class I-A Nondirectional signal in field strength, if not freedom from interference.

This pattern will be expanded on for some of the others at a later time.

The Tidal Waves were great, the song Farmer John was one of my favs and for me they were as local as you could get ,I lived in Roseville in the 60’s when they started, my brother went to School with one of the band members way back then.

Kev, do you know where to find Mark Karpinski? He came in quite a few years ago and talked with us, but now I don't know where to find him. I'm interested if he has any more surveys from the era from outstate MI. The CKLW and WKNR charts are pretty much complete on ARSA and ct30. Here's the #1 Chart for "Farmer John". I'm sure Farmer John was thrilled at the prospect of the narrator dating his daughter. 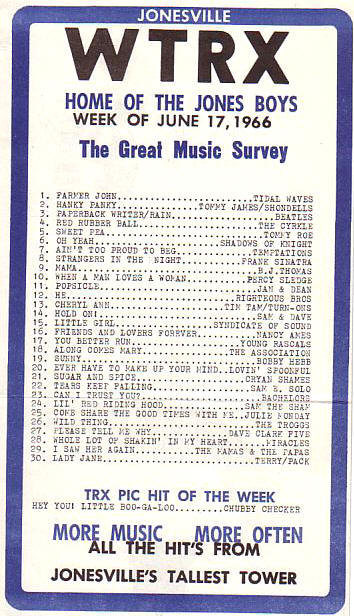 "Those of you who think you know everything are very annoying to those of us who do."

"Lies have to be repeated and repeated to be believed. Truth stands on its own merit."

No idea Art, I’ve been To busy since I retired in 2010 To really talk to any old friends ,I’m busier now than when I was working helping my older brother with his business.The place I would try to find music surveys would be Record shows ,my brother has purchased a ton of radio station surveys from Record shows once in a while there’s one in Madison Hieghts I think in April and November, I will ask my brother when and where the next one is